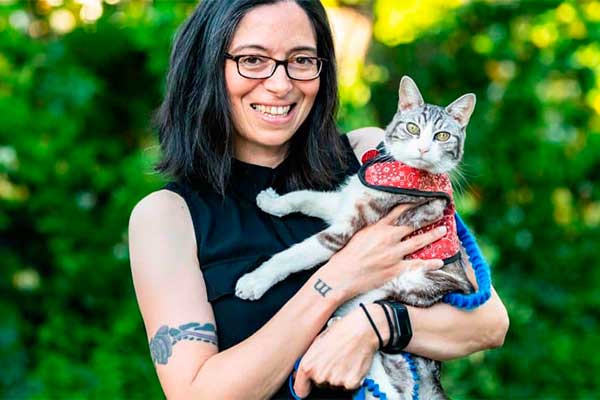 Top Cat Names: What to Name Your New Cat

Coming up with the perfect name for your new cat can get tricky. Rover.com just came out with its list of most popular cat names of 2019 to help you out.

Naming your cat might seem simple, but sometimes it can really take a lot of time and effort.  My husband and I tend to give our cats and foster kittens human names, especially old-timey English ones (I’m a bit of an Anglophile) – Agatha and Alastair got those. Mathilda got her name because it reminded my husband of one of his favorite old songs – Waltzing Mathilda. Poor Jack got the most simple name. He was a foundling, and we tried desperately to find a home for him. After a couple of months, it became obvious that his home was ours. We made up for his plain name by making his middle name Bartholomew.

Out of our four cats, Jack has the simplest name – but it fits him perfectly! © Annie Butler Shirreffs

Naming foster kittens is where we really have some fun. Most of them get human names. We’ve had Millicent, Bertie and Rupert, Frances and Oliver, Sinclair, Winston and Ainsley, Nigel, Harriet and Louise. Sometimes we name them in themes: The “candy crew” consisted of Jujube, Skittles and Zagnut. Then we had some “weeds” named Clover, Dandelion and Fern. Our “spice kittens” were Dill, Sage and Paprika. We also like to go for some literary names: Jem and Scout, Alice and Gertie (Gertrude), Ginsberg, Jeeves and Wooster, and Edgar, Allan and Poe (we were pretty proud of that one). And sometimes we just ditch the idea of human names. Two sets of Halloween kittens were Grimm and Boo, and Tarot, Rune and Ouija. A Christmas kitten was Eggnog. And a ridiculously cute pair of black kittens were Pixie and Puff.

Do cats really know their names?

This is the big question. Do cats know their names or are they responding to their human’s voice? Mikel Delgado, a cat behavior expert with Rover.com, says, “I personally think that animals tend to respond more to our tone of voice (at least initially) than to a specific name. Many of us call cats by several cute nicknames, so I don’t think that changing a cat’s name or calling them a nickname is inherently problematic.”

I use nicknames for my cats but the root of the name is still there. Mathilda is usually Tildy (or Tildebeest when she’s in a wild mood). Agatha is Waggie or Wags (shortened from Wagatha when we saw her wagging her tail like a dog). And Jack is usually Jackie or Jackster. When we use these nicknames, though, we’re usually talking ABOUT them, not TO them.

There are lots of pros and cons when it comes to naming your cat. © Getty Images

We don’t know if names harm cats or affect our perception of them, but Mikel believes that words matter in how we think of others. “I would suggest NOT giving your cat a ‘mean’ name or a name that implies they are dangerous, even if it seems funny to you.” After all, the majority of people love cats, but there are always some cat haters out there.

Mikel adds that when we give our pets names, we are recognizing that they are individuals, and so we feel more connected to them. “Just as we use names with people we interact with, it is part of what builds a relationship with another individual (whether cat, dog, human, etc.)”

And beware some naming pitfalls. For example, pop culture names are hugely popular – whether it’s a celebrity, a music group, sports figure, or TV or movie characters. Be careful, though. You probably don’t personally know your favorite celebrity, and the next big scandal could be theirs. Athletes get traded to other teams. And you never know how a beloved TV character is going to change. I’ve heard of so many kittens named Khaleesi and Daenerys – and we Game of Thrones fans know how that turned out!

Clever names are fun, but they might not always be appropriate – Chairman Meow for instance. Or anything overtly political, for that matter. And sometimes you can be TOO clever. My friend had a cat whose full name was Melba Edith Toast. Some people didn’t quite get it. According to Rover.com’s annual pet name survey, this year’s trends “are a true reflection of what we care most about, from the food we eat to the celebrities we love.” After surveying 1,500 pet owners, some of the most popular cat names are Oliver, Leo, Milo and Charlie for male cats; and Luna, Bella and Kitty for female cats.

For some cat parents, it’s all about food and beverages, with names like Oreo, Pumpkin, Ginger, Peanut, Cookie, Snickers, Sugar and Mocha topping the list. And healthy food-themed names are on the rise, too, like Chia and Boba.

With all the news about CBD and Cannabis, Rover.com found that marijuana-themed names are on the rise, with Kush, Doobie and Blaze trending upward.

No matter what you name your cat, don’t try to overthink it. I’ve spent hours trying to come up with names for foster kittens only to start all over again with something completely different and more fitting. Sometimes the perfect name will just hit me out of the blue. Just try to relax and look for your cat’s personality traits, and you’re sure to be inspired.

Annie Butler Shirreffs has worked in the pet industry for 20 years and is currently the senior editor of Catster and Dogster magazines. A cat lover since she was a little girl, she has always had feline friends in her life. She and her husband share their Southern California home with their four cats and an ever-changing clowder of foster kittens, all of whom enjoy being testers for cool, new products.